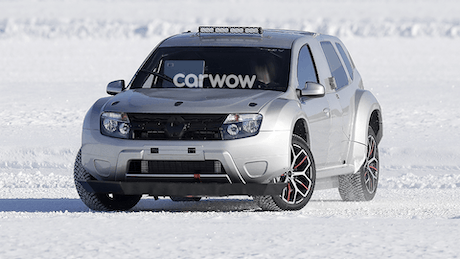 An electric SUV from Alpine is on the horizon, and a Dacia-based prototype has been spotted testing. Read on for everything known so far.

A new SUV from Alpine is on the horizon, and a very early prototype has been spotted testing.

This electric car has been dubbed Alpine GT X-Over internally and will square up against the likes of the Ford Mustang Mach-E GT and upcoming electric Porsche Macan.

As cool as this mule looks, it’s more Frankstein’s Dacia than anything like the finished Alpine article.

Though based on the Dacia Duster, this very early test car gives some hints as to how the Alpine GT X-Over could shape-up.

It may end up being a similar size to the Duster, albeit with wheels positioned further apart beneath swollen, more aggressive arches.

Compare the best SUVs on sale

Those wheels have been nabbed from the Renault Megane R.S. Trophy, so expect to see a set of completely different alloys, unique to Alpine, on the finished SUV.

Alpine has already teased the GT X-Over though. As you’ll see from these darkened images, it’ll have a coupe-like roofline and a quad-headlight setup as seen on the A110 sports car.

Rather than going in blind with the development of its own electric system, Alpine will likely dip into the Renault-Nissan alliance for some tech.

More specifically, it could borrow the 394hp dual-motor setup from the top-spec Nissan Ariya SUV. This could well be tuned even further and produce more than 400hp. If so, expect a 0-60mph time below five seconds.

However, Alpine will reportedly work with Lotus to build a new electric sportscar. Lotus is also getting ready to release a new electric SUV, so it’s conceivable that parts for this car could find their way into the new Alpine X-Over, too.

If Alpine borrows the Nissan Ariya’s 87kWh battery, you can expect the new electric X-Over to come with around 250 miles of range.

Alpine’s parent company, Renault, has confirmed it’ll launch 10 EVs across all its brands by 2025. Therefore it’s likely the Alpine GT X-Over will go on sale before then.

Keen for a new SUV? Take a look at the latest models on offer or compare electric cars