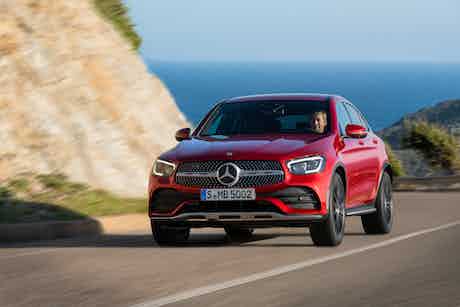 Mercedes has revealed the facelifted version of the GLC Coupe. The sporty SUV gets tweaked looks, updated safety features, new infotainment and cleaner engines – read on for everything you need to know.

This is the facelifted Mercedes GLC Coupe – a practical SUV that gets a sprinkling of added style compared to the bulkier standard GLC.

Next to the standard GLC the GLC Coupe gets a single-rung grille with a diamond design and a sloping roofline that makes it look like the roof and windows of a coupe have been fused to the bottom half of a GLC. Distinguishing this facelifted version from the outgoing model isn’t easy but if you have the recognition skills of a police spotter you’ll notice the new model’s revised LED headlights, which are now encircled by LED daytime running lights, gaping air intakes in the lower half of the front bumper and new tail lights with rectangular shaped LEDs.

These light revisions continue to the car’s interior, which you can now have finished in Magma Grey and choose from a pair of re-styled multifunction steering wheels that have tiny touchpads for controlling the car’s infotainment system.

The infotainment system itself is all new – getting the MBUX operating system first seen in the A-Class. It scraps the scroll-wheel control in the old model for a new touchpad – hopefully one better than the awful system you get in a Lexus – and there’s now also a larger 12-inch digital instrument binnacle that combines with either a 7 or a 10-inch central touchscreen. Along with the control between your seats, on the steering wheel, the touchscreen on the dashboard and optional gesture controls, you can also operate the system using spoken-word voice commands. Just saying ‘Hey Mercedes…’ sparks the system into life automatically and you can tell it what to do without having to stick to a rigid set of commands.

Along with controlling standard kit such as the car’s stereo and ventilation system, it also controls optional extras like the Energizing comfort control. It umbrellas a variety of the GLC Coupe’s systems – the lighting, stereo, climate control, seat heating and massage functions – to adjust to your mood. So, if you say ‘Hey Mercedes, I’m stressed’ it’ll pump mellow tunes through the stereo and treat you to a tension-releasing massage, automatically.

If that doesn’t help you relax maybe the revised GLC Coupe’s new safety features will do the trick. First up is the exit warning function, which sounds a tone and flashes your door lights if you try to swing the door out in front of a passing cyclist. Next is the emergency corridor function which means the Mercedes’ self-drive tech can automatically make way for emergency vehicles on the motorway or stuck in the tail end of a long traffic jam. Finally, there’s Mercedes’ Trailer Manoeuvring Assist, which uses graphics on the car’s 360-degree camera display to direct you when you attempt the tricky job of reversing while towing.

Along with the tech improvements, Mercedes has also improved the GLC Coupe’s engine range and all models get four-wheel drive as standard. You can choose from three diesels the 163hp GLC 200d, 194hp GLC 220d and the 245hp GLC 300d, which are all now compliant for tough new emissions regulations (called Real Driving Emissions Stage 2) that come into force in 2020. Fuel economy ranges from 54mpg in the 200d to 48mpg in the 300d.

Bigger changes have been reserved for petrol models that now have the mild-hybrid tech – Mercedes calls it EQ Boost – that helps save fuel while also providing a boost of electrical energy when you ask for a burst of acceleration. The clever tech means the 197hp GLC 200 and the 258hp GLC 300 are both capable of nearly 40mpg, pretty good for a big SUV with a petrol engine and spritely performance.

If that all sounds worth waiting for, the new Mercedes GLC Coupe goes on sale in early May with first cars delivered to their new owners in August. Prices start from £37,500.

Keep up-to-date with all the latest car news by signing up to the carwow newsletter at the top of the page.