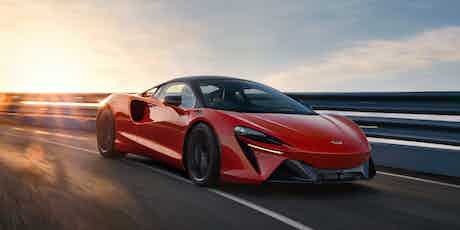 McLaren has revealed a brand-new, 680hp hybrid supercar called the Artura. Read on for all the exciting details.

The McLaren Artura is a brand-new hybrid supercar alternative to the Porsche 911 Turbo S, Honda NSX and Ferrari 488 GTB. McLaren has just revealed this new machine, which produces a monstrous 680hp and will cover the 0-60mph sprint in three seconds flat.

The McLaren Arutra takes on familiar styling cues from the manufacturer’s back catalogue but sharpens them up with a modern twist.

Upfront, thin headlights are housed in vents designed to look like the McLaren logo while the bumper features large intakes on either side of an exposed carbon fibre panel.

The side profile of the car is very similar to the McLaren 570S, albeit with new vents above the wheel arches (remind anyone of the old Porsche 911 GT3 RS?) and a larger hole to feed air into the engine at the back. It’s similar to the 570S at the rear, too, albeit with smaller single-strip brake lights.

In typical McLaren fashion, the Artura has a very driver-oriented cabin, trimmed as though someone was desperate to deprive the rest of the world with any suede-like Alcantara.

There’s no denying it creates a racy look, though. Body-hugging bucket seats are included and have adjustability in the backrest so you’re not just locked into a Lewis Hamilton-esque racing position if you don’t fancy it. If that’s not enough, there are optional ‘Comfort’ seats — though these do add 9.5kg each to the car.

The steering wheel is trimmed in leather as standard too and is completely devoid of controls — with the goal of limiting driver distraction.

Rather, functions for the audio and other non-crucial bits have been moved into the new infotainment system. This is displayed on an eight-inch, portrait screen with the software itself based on Android technology. There’s also support for Apple CarPlay and Android Auto.

The best supercars on sale today

Undoubtedly the most interesting bit about the McLaren is its engine. This is the first truly new engine for a McLaren in, well, forever, ditching the tried-and-tested 3.8-litre twin V8 in favour of a 3.0-litre twin-turbo V6. But, there’s more too it than just plain downsizing…

See, the McLaren Artura is the brand’s first large-scale-production plug-in hybrid. It has done similar engine setups before with the limited-edition P1 and Speedtail hypercars, but this is the first time the tech has entered McLaren’s more mainstream offerings.

With the V6 paired to an electric motor, the McLaren Artura has a mind-boggling 680hp and 720Nm of torque at its disposal. Plus, with a 7.4kWh battery on board, it can manage 19 miles on electric driving alone. That power is sent through an eight-speed gearbox to the rear wheels only unlike the Honda NSX hybrid, which uses an all-wheel-drive setup.

With all that power onboard, the McLaren Artura will cover the 0-60mph sprint in 3.0 seconds flat before going on to an electronically-limited 205mph top speed.

As well as being ridiculously fast in a straight line, the Artura should be able to take on corners pretty swiftly as well. It weighs 1,498kg — not a whole lot more than a Ford Focus ST — and features all sorts of clever gubbins such as an electronic differential, adaptive dampers and Pirelli P Zero tyres.

If you want a McLaren Artura, go and find your credit car – it’s on sale now. Entry-level cars (if you can call them that) cost from £185,500, so it’s not cheap. You can expect the first cars to be delivered in Autumn 2021.

Not sure what sports car to make your next? Tap here to find the right car for you