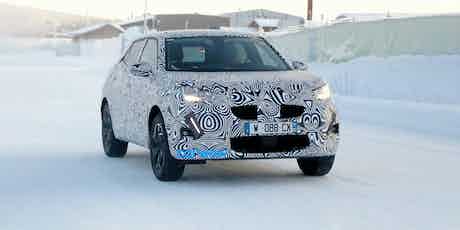 The 2020 Peugeot 2008 SUV has been spotted during a test in the Swedish snow. Here’s everything you need to know about it so far…

The 2020 Peugeot 2008 SUV is undergoing cold-weather testing in Sweden.

It’s expected to go on sale at the tail end of next year, providing an alternative to models such as the Citroen C3 Aircross, Kia Stonic and Hyundai Kona. With the current 2008 starting at around £17,500, it’s safe to assume the 2020 version will have a similar price tag.

These latest pics show the 2020 Peugeot 2008 in camouflage so heavy that it’s hard to draw any concrete conclusions on how the front end will look. But, that said, the large sensor on the bottom half of the grille does suggest this will be the first 2008 to be offered with active cruise control, which can brake and accelerate the car for you. Whether those fang-like LEDs beneath the headlights are a nod to the 508, or just a ruse to throw you off the scent, is up for the debate.

There’s a lot more to be said about the car in profile, where those smaller side windows make the new 2008 look a good deal sleeker than the van-like current model, while the crease running above the door handles adds presence. The back of the car, meanwhile, shows what look to be finished-article rear LEDs that mirror the ‘cat claws’ style seen on the 3008.  However the 2020 Peugeot 2008 turns out in the metal, it has lots to live up to, given that the 508 won the Style Award at the 2018 carwow Car of the Year Awards.

What these pics do seem to indicate for sure is that the 2020 Peugeot 2008 is larger than the outgoing model, gaining a few centimetres in height, width and length. This should free up more rear passenger space and give you a larger boot than you get in the current 2008.

While we have yet to see pictures of the interior of 2020 Peugeot 2008, you can expect it to get a significant revamp with a huge infotainment screen replacing the current model’s analogue dials. As with the 3008 and 5008, the 2008 is likely to get a sculpted dashboard complete with shark-teeth metal buttons and stylish fabric trim pieces. Its clean design will be made possible by a large central infotainment screen that will take the place of conventional buttons.

Engines will also be taken from the rest of the range, with the 2020 Peugeot 2008 using the company’s tried-and-tested 1.2-litre PureTech petrol with 82, 110 or 130hp. You’ll also likely be able to pick from a six-speed manual and a seven-speed automatic gearbox. And, while all models will be front-wheel drive, you’ll be able to have the car with clever Grip Control – traction control that can find a surprising amount of purchase on poor surfaces.

Keep up-to-date on the 2020 Peugeot 2008 – and hundreds of other car models – by signing up for the carwow newsletter.