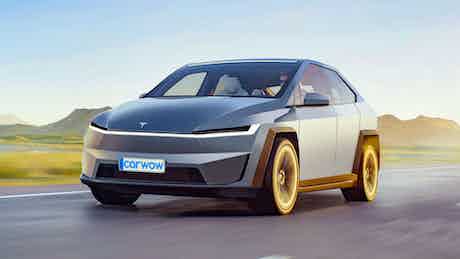 How could the new Tesla Model X look? Well, very possibly like these renders…

Could this be how the new Tesla Model X looks? These exclusive renders imagine a replacement for the current version of the SUV, which has been on sale since 2015 — albeit with updates along the way.

At the heart of the new Model X, which isn’t expected to arrive until at least 2025, will be clever new battery technology from Tesla to boost range and cut weight.

The first could be an SUV inspired by the Cybertruck, with sharp creases and boxy wheel arches for a seriously rugged look.

It’s more likely a simplistic evolution of the current Model X will be seen though, as seen above.

It’ll take on the typical clean, bubble-ish design of most Teslas with perhaps an even more minimalist rear look – in the case of this image, inspired by the upcoming Tesla Roadster.

It’s unlikely much will change for the new Tesla Model X’s interior, considering the current version consists of little more than a steering ‘wheel’ and a huge central display.

Expect that plane-like yoke to make a return, perhaps accompanied by an even larger upgraded display.

The new Model X should still be able to seat 7 as well, and perhaps with even more interior space thanks to new battery technology allowing cells to take up less space.

Tesla is developing new ‘tabless’ battery technology, which is likely to find its way into the new Model X.

Essentially, these use a different type of connector to conventional EV batteries which should make them both cheaper and easier to produce.

They’re also smaller, meaning Tesla could either pack more batteries in for increased range or reduce the amount used to save weight and costs.

Expect a variety of Tesla Model X’s to go on sale, including Long Range and Plaid versions.

The 1,020hp Plaid version of the current car could return with the exact same dual motor setup, with the reduced weight of the batteries contributing to a performance increase.

The existing Model X Plaid can crack 0-60mph in 2.5 seconds, so expect something closer to 2 seconds flat.

It’s unlikely the new Tesla Model X will be on sale before 2025. By that point, it’s probable refreshed versions or even new generations of alternatives like the Mercedes EQC or Audi e-tron will be on sale too.

A current Tesla Model X will set you back at least £98,980, though its possible cheaper battery tech may keep the new car at a similar cost — even accounting for inflation.

Keen for an EV? Take a look at the best electric cars on sale today