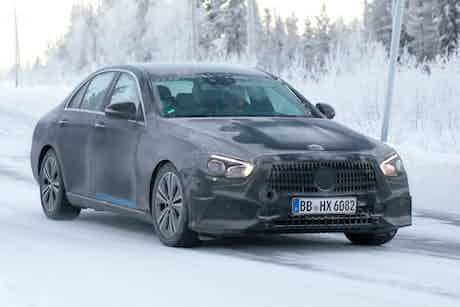 The facelifted Mercedes E-Class has been spotted again undergoing winter testing. Keep reading for everything we have on the new E-Class that’s expected to go on sale in 2020.

The current 2020 Mercedes E-Class certainly doesn’t look like it’s in need of replacing but since its 2016 launch, the competition has got significantly stiffer with the introduction of new versions of the BMW 5 Series and Audi A6, along with Lexus’ new alternative, the ES.

The new E-Class will get Mercedes’ new MBUX operating system, which was first seen on the new A-Class and bursts into life the minute you start a sentence with the words ‘hey Mercedes’ – meaning you can perform tasks such as adjusting the air-con or programming the sat-nav by simply telling the car to do it. The same system also means the new E-Class’ infotainment screens will be able to display the sat-nav’s directions on a video image of the road ahead, with your route seemingly hovering over it in augmented reality. You can also expect to see higher-definition displays that’ll match what you’ll see in an Audi or BMW in terms of clarity.

Predicting changes to the E-Class exterior hasn’t been made easy by the heavy cladding on this car, but it’s clear it’ll get redesigned headlights that are likely to feature the same ‘scowling’ design seen on the new CLA to make the car look more distinctive. For the same reason, the E-Class is likely to dispense with its twin-rung grille design, for a single-rung look complete with the ‘diamond’ finish seen on A, CLA and C-Class cars. A large amount of cladding underneath the grille also seems to indicate the Mercedes will get a new lower bumper complete with gaping air vents. While the E-Class doesn’t seem to have changed in profile, those covers over the back mean you can expect it to get rear lights that’ll have the cleaner ‘C’ shaped LED light signature you see on the updated C-Class.

Sign up to the carwow newsletter at the top of the screen to keep up to date with all the latest on the E-Class and many more new cars.