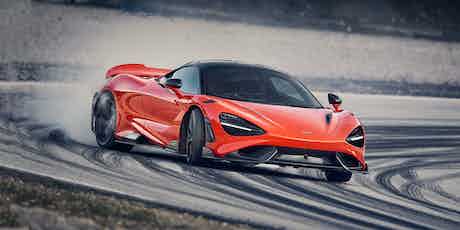 Here’s everything you need to know about the McLaren 765LT, the brand’s latest supercar, including performance, price and specs.

The McLaren 765LT is a new limited-run supercar,  joining the McLaren 675LT and 600LT, as well as the older F1 longtail, in the ranks of special track-focused cars from the company. Like those previous models, only a set number of cars will be built – 765 in this case. Read on for everything you need to know about it.

The McLaren 765LT is heavily based on the firm’s 720S supercar, but with key changes. Chief among which is the long tail at the rear gives the car its name, but it’s only slightly longer than the 720S. Further changes come thanks to a new aerodynamic kit attached to the car’s carbon chassis – the same platform used by the rest of McLaren’s car range.

The front splitter, front bumper, front floor, side skirts, rear bumper, rear diffuser and active rear wing are all different to the ones fitted to the 720S and produce extra downforce – up to 25 per cent more. New suspension parts, lightweight wheels and other weight-saving technologies are also in place on the 765LT. They’re there to make it feel more like a racing car to drive, but they also help it look far meaner than the standard 720S.

All that weight saving means the McLaren 765LT is 80kg lighter than a 720S, at just 1,339kg. This means it makes even better use of the power produced by its 4.0-litre turbocharged V8 engine. This has been tuned to produce 765hp and 800Nm of torque, and the seven-speed automatic gearbox from the 720S has also been tweaked for the 765LT to improve acceleration and responsiveness.

The low weight means the McLaren 765LT has a power-to-weight ratio of 622hp-per-tonne, which means it’ll sprint from zero to 60 in just 2.7 seconds. The 765LT will hit 124mph from a standstill in just seven seconds, and the standing quarter-mile is dispatched in 9.9 seconds on its way to a 205mph top speed.

McLaren has upgraded the suspension for the new 765LT resulting in wider-set front wheels and a lowered ride height – all to make it corner faster and feel better to drive on track. McLaren’s also adapted the software side of its active suspension set-up to bolster its the 765LT’s cornering capabilities.

Lightweight alloy wheels and sticky Pirelli P Zero Trofeo R tyres are fitted as standard, which save weight and improve grip respectively, while carbon-ceramic brake discs using callipers from the McLaren Senna provide ultimate stopping power. The rear wing acts as an air-brake, too, and there’s a quad-exit titanium exhaust, which is lighter than the 720S’ exhaust and provides a different sound.

The focus on weight-saving in the McLaren 765LT stretches all through the car, including the interior. The sports seats are 18kg lighter than the ones in a 720S, and carbon fibre has been used on certain bits of the cabin to reduce weight even further. Even the carpets have been stripped out and the air-conditioning and stereo removed (though these can be added as optional extras).

The McLaren 765LT is already in production, so it’s on sale now. You’ll have to get into McLaren’s good books to get hold of one because the company has already sold every car it plans to make in 2020.

Only 765 will be made overall, and they’ll set their lucky buyers back from around £280,000. There are plenty of options available for those with very deep pockets, too, thanks to McLaren’s MSO division that’ll provide bespoke interior trim and paint options for owners wanting a unique car.

Check out the latest carwow deals on the best sports cars on sale or read our roundup of the best supercars you can buy. Watch our video below to see how the new McLaren 720S compares with the 675LT.