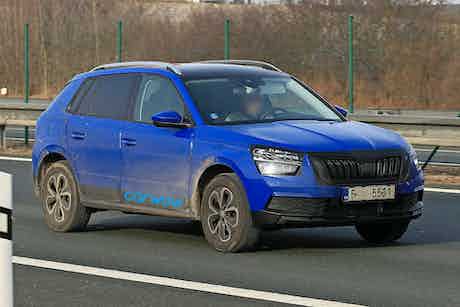 The Skoda Kamiq has been spotted undisguised ahead of its unveil at the Geneva motor show next month.

The big news is that the Kamiq will look like… a scaled down version of the Kodiaq and not at all like the show-stopping Vision X that we saw at last year’s Geneva show.

And that’s a shame because, lets face it, Skodas aren’t exactly known for their adventurous styling. What you do love them for though, is their handsome looks and the Kamiq ticks the boxes in that department – resembling a smart-looking Kodiaq that’s gone through a 90° wash cycle.

Crafty Skoda tries to throw you off the scent with this test car’s strategically placed fake lights and shrunken radiator cover, but its clear the Kamiq is going to get a stacked light design and an identical grille to what we have already seen on the Karoq and the Kodiaq.

Around the sides there’s less to talk about, though those roof bars are easy to spot and there’s a vRS-ness to those wheels that could, just maybe, hint that a quick Kamiq may be just around the corner. Meanwhile, at the rear of the car, attempts seem to have been made to hide the fact that the Kamiq will get a full length light bar across its rump.

We’ll have more info on the Kamiq ahead of its launch at the Geneva motor show. Sign up to the carwow newsletter to keep up to date with all the latest.