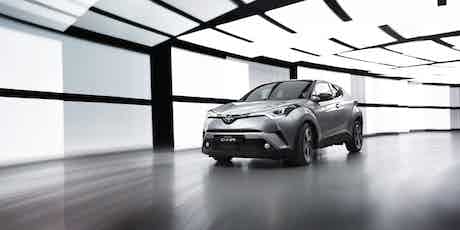 The Toyota C-HR is an upcoming addition to the crossover class. How will it fare against the likes of Nissan Qashqai and Renault Kadjar?

The new Toyota C-HR looks set to offer buyers with a sportier-looking alternative within the highly competitive crossover class. The name stands for Coupe High Rider, and Toyota says the model will be aimed at the sort of people “who aspire to live life to the full”. We take a look at what to expect from the Japanese brand’s upcoming alternative to the Nissan Qashqai and Renault Kadjar.

From the outside, it looks clear that the C-HR is set to cut a bold figure beside the current range of family crossovers. The front is dominated by enormous LED headlights, whose angular shapes run from almost the base of the windscreen pillars towards the slim front grille.

The C-HR’s body is a riot of sharp creases and clashing lines, from the slashed cutouts in the front bumper to the swollen wheel arches and sloping roof, the latter emphasised by a floating roof effect achieved by the contrasting black finish. In overall dimensions, the C-HR is slightly shorter than the RAV4, which should make it marginally longer than the Qashqai.

The above interior shot of a C-HR prototype suggests that the dashboard will feature a large infotainment screen mounted high up, with flashes of piano black trim dotted around to give an impression of expense. The raised driving position typical of cars in this class should give the C-HR great forward visibility. Cabin space looks set to be compromised ever so slightly by the coupe-like roofline, and though the 370 litre boot is some way short of the Kadjar, it’s still on a par with more conventional family hatchbacks like the Vauxhall Astra. It’s likely that rear-seat headroom will also be compromised by that roof.

The C-HR is set to be offered with two engine options. A 1.2-litre turbocharged petrol, already found in the Auris, looks set to become the entry-point of the range. The 114hp unit will be paired as standard with a six-speed manual gearbox, which features rev-matching technology for smooth downshifts. A CVT automatic will also be offered. The manual will be available to buyers with a choice of front or four-wheel drive, while the CVT will be four-wheel drive only. Perhaps surprisingly for the class, Toyota shows no intention of offering buyers a diesel option. Instead, a frugal hybrid variant will represent the fuel-sipping option in the range. The 1.8-litre petrol/electric motor combination is shared with the Prius, and offers a system output of 120hp. Though the C-HR’s taller, less slippery shape means that it won’t quite match the eco-icon’s 94.2mpg and C02 emissions of 70g/km, Toyota believes that a sub-90g/km figure is still achievable.

The petrol electric installation will be quite straightforward, as under the skin the C-HR shares many components with the Prius. This bodes well for how the C-HR should feel from behind the wheel, because the latest Prius is surprisingly enjoyable to drive.

First deliveries of the C-HR are due in January 2017, with pre-orders beginning in Autumn 2016. Prices haven’t yet been announced, but in order to remain competitive with the Qashqai, we’d expect entry-level models to start at around the £18,000 mark.