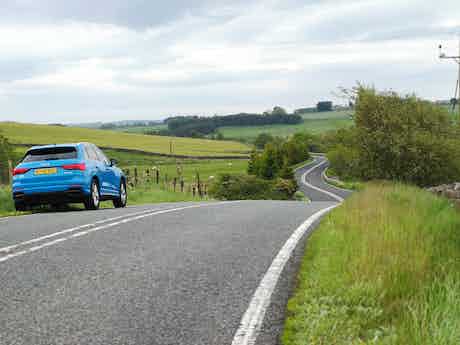 Once upon a time fitting an SUV with a tiny petrol engine and an auto ‘box would have made it glacially slow and very thirsty. So how does the combo work in our Audi Q3? news editor Russell Campbell finds out…

As the saying goes ‘time waits for no man’ and the same goes for SUVs.

Back when their popularity was just taking off in the late 90s, you’d have been lucky to find an offroader with an engine smaller than 2.0-litres. But here we find ourselves with a midsize SUV pushed along by a piddly 1.5-litres.

It shouldn’t work and for the first few months of ownership, it didn’t. Okay, so there was nothing wrong per se, but the combination of the small engine and automatic gearbox made the car feel ponderous. And the promised 45mpg fuel economy never materialised – we were lucky to get 35 miles to the gallon.

Fast forward a couple of thousand miles and things seem to have changed significantly. Where the Audi’s gearbox used to feel a little dimwitted, it now changes gear smoothly and slickly and we could swear the Q3 is little bit peppier than before.

Fuel economy has also improved. On a 80-mile drive along twisting A-roads, I got 46mpg with a little bit of effort (unfortunately without taking a photo to document this) and almost 40mpg on a fast cruise down the A1.

The Q3’s particularly good in efficiency mode when the engine and gearbox respond more gently to save fuel and the cruise control is happy losing a bit of speed uphill to avoid working the Q3 hard to the detriment of fuel economy.

Even the engine has been primed to be economical. Notwithstanding it’s small capacity and efficient turbocharging, it also benefits from Cylinder On Demand technology, which can switch off half the engine’s cylinders to help save fuel.

All this comes with this with one glaring caveat, mind you, because while the Q3 might be more economical than off-roaders of old, it’s also significantly worse at going, well – off-road. Without four-wheel drive or tough off-roader construction, our Q3  isn’t good for much more than climbing the kerb in a Waitrose car park.

But then, it never needed to be, if one thing has changed since the first SUVs went on sale, it’s that manufacturers now accept that no one will ever take them off road. As result, we now get a car that’s much more suitable for driving on it.

This month, the Audi Q3 remained in the hands of carwow’s video producer, Sam, who’s also been spending a lot of time behind the wheel of the larger Skoda Kodiaq vRS SUV. With both cars costing around the same, they were put to the test to see which one would win Sam over the most.

As someone who needs to regularly haul around a ton of video equipment – and carwow’s resident pooch, Wilson – Sam prefers the more generous interior space of the Kodiaq. While the Q3 is definitely roomy, the Skoda is a class above in size. Sam notices the difference mostly in the boot, where the Skoda offers more than 30 percent more room than the Audi. Be that as it may, the Q3’s storage space still gets Wilson’s approval…

Sam prefers driving the Kodiaq, too. Going from 0-60mph takes less than seven seconds in the Skoda, making the Audi’s 9.3-second time seem leisurely by comparison. The Kodiaq is also noticeably quicker to respond when you really put your foot down.

She’s had no complaints about the cabin of the Kodiaq vRS while driving, but has been pestered by a “weird squeak” emanating from the Audi. That’s not good, especially for a premium SUV that puts so much emphasis on build quality. What’s even less reassuring is that a Check Engine light has appeared on the Q3’s digital display. More on that next month…

Elsewhere, it’s noticeable that the Audi doesn’t have a keyless start button, which is surprising as it’s something you get across the entire range on alternatives like the BMW X1.

It isn’t all bad news for the Q3, though. Sam wholeheartedly prefers the car’s infotainment over what you get in the Skoda. It not only looks better; it works better, too. Its voice activation system manages (most of the time) to unscramble her Essex twang, while the Skoda’s system largely fails.

Sadly, it’s all for naught, as Sam says that she would ultimately pick the Kodiaq over the Q3. The Audi may be posher but, overall, it’s less practical and not quite as powerful or as relaxing to drive as the Skoda.

We’re well into our time with the Q3 and, since our first update, its keys have been handed to carwow producer Sam who, along with having to lug heavy camera, also needs a boot that’s suitable for carrying Wilson, the carwow dog.

But while its interior is practical, it’s the Audi’s technology that really impresses Sam. The Q3 comes as standard with Android Auto and Apple Carplay, which means Sam can use the apps on her phone through the car’s big screen. That includes navigation app Waze – which has an ability to navigate around congestion that makes it a godsend in London – and Spotify which can create a playlist so moulded to your tastes it’ll shame the selections made by any radio DJ.

Something else that marks out the Audi’s infotainment from lesser units is its voice activation system. Compared to the infuriating system in our Kia Proceed long-termer, the Audi can understand spoken word commands so you don’t need to stick to a list of exact phrases like you do in the Kia, and the Audi’s also much better at dealing with accents. Important because the carwow office has a variety of voices that stretch from Glasgow to the South Coast with a little bit of Brummy sprinkled in for good measure.

The Audi’s also really good at the tech you can see. Its infotainment system is crystal clear and pretty to look at – which does make the lack of a rearview camera seem like a real omission – and the Virtual Cockpit remains as good as ever, wowing us with its ability to transform into an expansive sat-nav map at the touch of a button.

There are a few things we don’t like about the Q3’s infotainment though, such as the lack of a swivel-wheel control like you got in Audi’s of old.  Most of the time you can get away with using the car’s voice activation system but if it lets you down, you’re stuck with using the touchscreen which can be a pain to operate when you’re driving along.

What’s been annoying us a lot more is our Q3’s combination of a 1.5-litre petrol engine and an automatic gearbox which so far has proved to be neither economical or fun to drive, more on that next month.

Okay, so our Audi Q3 might not have beaten the Volvo XC40 in carwow’s group test but there’s still a lot to like about it. For one, it’s a smart-looking machine, particularly in our car’s specification. It’s an S line so gets lowered suspension, huge 19-inch alloy wheels and a sporty body kit. That Turbo Blue paint also turns heads.

As an S line, carwow’s Q3 looks nicer inside than a basic model thanks to its illuminated door trims, dark headlining and metal pedals. Our car has also been optioned with desirable kit such as a flat-bottomed steering wheel (£250), selectable multi-coloured ambient lighting (£100) and an upgraded Virtual Cockpit display (£250). The latter means the digital instrument binnacle increases from 10.25 to 12.3 inches in size. Other options include the £250 Storage Pack – it adds extra interior cubbies, a 12v power socket and additional boot lighting – electrically adjustable front seats (£675) that are heated (£300) and heated wing mirrors that fold away when you lock the car (£225). Lumbar support (£255), auto park (£300) and an uprated Audi Sound System (£275) complete the list. That little lot means our Q3 would set you back  £37,565 – a lot for what is a 150hp SUV with two-wheel drive.

That said, it does look and (for the most part) feel like an expensive car. The huge central infotainment has pretty graphics and crystal clear clarity and, nine times out of ten, its voice activation system does exactly what is asked of it. Just as well, because writing letters into the central screen with your left hand – if you’re right-handed – can be an infuriating process. But perhaps not quite as annoying as the numerous squeaks that have been cropping up around the cabin from behind the dashboard and somewhere near the rear seat. They’ll be fixed by a visit to the dealer, which we’ll report on soon.

What won’t be fixed by a visit to Audi are the hard interior plastics that you find on parts of the interior like the doors, and that the combination of the seven-speed auto and 150hp petrol engine can feel a little bit laggy when you’re nipping about town. And if that all sounds hard on the Q3 then it isn’t meant to. It has already shown itself to be extremely practical on an obligatory trip to the Reuse and Recycle Centre – its flat floor and lack of a load lip making it easy to fill the back with junk. It’s also a nice car to drive – once you get up to speed – with positive steering and a body that doesn’t lean too much in bends, we’re also quite keen on the pure white light of the LED headlights.

All of which means the Q3 hasn’t proven itself to be our knight in shining armour just yet, but it’s certainly no rogue either – can it push itself further into our affections over the coming months? You’ll have to wait to find out…

Bookmark this page to get regular updates on our long-term thoughts on the Audi Q3.