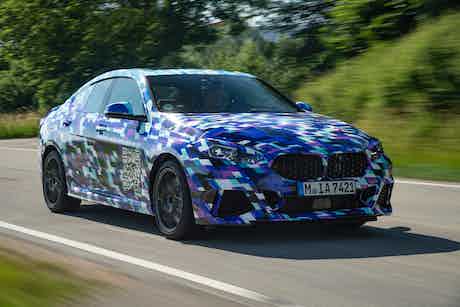 The new BMW 2 Series Gran Coupe gets stylish looks and a posh interior decked out with the latest infotainment, it’s also the first 2 Series to be front-wheel drive. Here’s everything you need to know about its price, specs and release date.

The BMW 2 Series Gran Coupe will be revealed at the Los Angeles Motor Show in November 2019 and go on sale in Spring 2020.

The latest ‘spy’ pictures of the new BMW 2 Series Gran Coupe were supplied by BMW themselves and show a car that’s months from going on sale.

As it’s based on the new 1 Series hatchback, the two models look pretty much identical front on. You get a huge grille with two ‘kidney’ elements, which will be linked in the middle and sandwiched between a pair of LED headlights with distinctive daytime running lights.

The bits that have changed are more obvious when you step to the side of the car. The dumpy proportions of the 1 Series have been replaced with a more flowing design courtesy of the Gran Coupe’s longer body and swept-back roof. You’ll get a nice surprise when open the doors and notice their sleek, pillarless design.

That sense of style carries over to the back of the car, where the sloping rear window frame makes the 2 Series Gran Coupe look more dynamic than the boring, meat-and-two veg styling of the boxy 1 Series. You can expect all Gran Coupes to have LED taillights that emit a pretty glow at night.

The BMW 2 Series Gran Coupe will have an interior based on the one in the 1 Series. It will combine soft-touch, spongy plastics with solid build quality and an interior that won’t shake or rattle over bumps. You can expect the Gran Coupe to just edge a Mercedes CLA in terms of quality.

You’ll be able to choose from a range of trim pieces. Basic models will get shiny black plastics, while M-Sport cars will have classy, metallic-effect trims and supportive sports seats. You’ll even be able to make the interior look prettier at night by opting for some optional ambient lighting, which will make the cabin glow in one of a choice of colours.

The 2 Series Gran Coupe’s infotainment will be just as impressive. It will be available with a pair of large screens, including one in the middle of the dashboard and a digital instrument binnacle that takes the place of conventional dials behind the steering wheel. BMW’s iDrive control – a rotary dial that sits between the front seats – will be carried over from the old model, making it easy to navigate through menus even when you’re on the move.

If you fancy taking a more high-tech route, you’ll also be able to operate the infotainment using your voice – speaking to it like you would with Amazon Alexa or Apple’s Siri – or using gesture controls. For example, by twiddling your index finger in a clockwise circle, you can turn the stereo’s volume up or, when you twiddle counter-clockwise, down.

While the cabin design and infotainment in the 2 Series mirror the 1 Series’, you can expect clear ground between the two cars in terms of practicality. The 2 Series’ 450-litre boot is 70 litres bigger than the 1 Series’. You can also expect the 2 Series to have slightly more rear legroom.

It’s not all good news, though. The sloping roof means that rear headroom will probably be tighter. Plus, if you’re sitting in the back, the 2 Series’ smaller rear windows will also likely make it feel more claustrophobic inside.

The BMW 2 Series Gran Coupe is based on the same underpinnings as the new 1 Series, which is a front-wheel-drive car considered to be the most fun-to-drive in its class. The 2 Series Gran Coupe is likely to get a slightly stiffer suspension setup that will make it feel even easier to drive quickly through a series of corners.

The 2 Series will get the 1 Series’ high-tech stability control and torque vectoring that’s wired directly to the car’s engine for quicker responses. This means it can trim your line into and around corners, making you look and feel like a driving god.

To turn that feeling up to 11, you’ll want to go for the M235i xDrive. It has four-wheel drive, an eight-speed, dual-clutch automatic gearbox. Its limited-slip differential up front helps the car bite into the tarmac when you floor the accelerator out of corners. Its turbocharged 2.0-litre engine is also the most powerful BMW has ever fitted to a production car, producing 306hp and 450Nm of torque. Altogether, these figures will get the 2 Series from 0-60mph in under five seconds, give it a limited top speed of 155mph and the capability to return fuel economy of up to 42mpg.

That’s the only engine that has been confirmed for the 2 Series Gran Coupe but you can expect it to be offered with five in total, including one more petrol and three diesels. The petrol is the three-cylinder, 1.5-litre 118i. It produces 140hp, which will get the 2 Series from 0-62mph in under nine seconds and return fuel economy of more than 50mpg.

Keep your eyes peeled to the carwow news pages for all the latest news on the BMW 2 Series Gran Coupe.