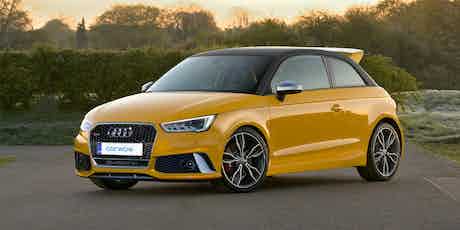 Audi will add a new performance car to its lineup when it launches the RS1 in 2018. This compact four-wheel drive hot hatch will not only be the most affordable RS model in the German brand’s range, but it will help see out the current generation A1 in style. Our exclusive render (above) shows how it could look.

Unlike the limited edition A1 Quattro – only 19 were ever sold in the UK – this range topping supermini will be available in right-hand drive. Audi hopes it will offer customers a compelling alternative to the successful Mini John Cooper Works.

Audi’s previous RS cars have been adorned with numerous cosmetic enhancements to help then stand out from their more sober siblings – we expect the RS1 to be no different. Large alloy wheels with low-profile tyres will hide beneath wider arches and the whole car will hug the ground more closely thanks to lowered suspension and sporty new side skirts.

We don’t expect the new model’s interior to differ too significantly from the current S1. A number of RS and quattro badges will almost certainly be fitted to the flat-bottomed steering wheel and the dashboard while contrasting stitching is likely to feature on a pair of upgraded sports seats. To help justify its higher price tag, the RS1 will probably come with a number of equipment upgrades, too.

The new RS1 will reportedly be powered by a 280hp version of Audi’s turbocharged 2.0-litre four-cylinder unit. To transmit this power to the wheels Audi is developing a new seven-speed dual-clutch automatic gearbox – a six-speed manual unit will probably still be available, however. This new car is expected to use the same four-wheel drive system as the current S1, providing it with enough traction to leap from 0-62mph in less than 5.8 seconds.

No official prices have been announced but we expect the new RS1 to cost more than £30,000 and be offered in three-door and Sportback variants. It will probably go on sale in early 2018 to mark an end to the current generation A1’s production before an all-new model is introduced later that year.