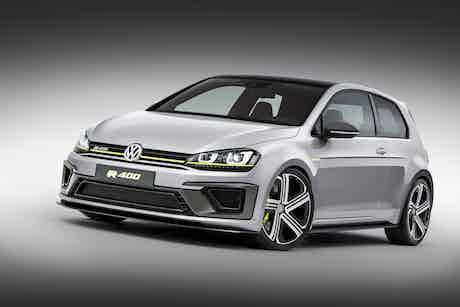 Rumoured for production the VW Golf R400 gets from 0-62mph in just 3.9 seconds  – read all the details

Think that the 265hp Golf Clubsport is too slow? Or the 300hp four-wheel-drive Golf R’s a little conservative? Chances are you’re in the minority, but one to which the new Volkswagen Golf R400 will hold major appeal.

The clue’s in the name and that ‘400’ moniker points to the model’s massive 400hp that’s pumped out by a modified version of the 2.0-litre turbocharged petrol engine fitted to the standard Golf R. The extra 100hp is likely to come mostly thanks to a larger turbocharger.

In the near-production-ready concept revealed at 2014’s Beijing Motor Show, 400hp was enough to propel the car from 0-62mph in a mind-bending 3.9 seconds and on to a limited top speed of 174mph. Those incredibly stats will make the new Golf significantly quicker than all its direct rivals including the Renaultsport Megane 265, SEAT Leon Cupra and Honda Civic Type R, and – controversially – make it a real competitor for the Audi RS3.

Although the Golf R is a relatively subtle affair, the R400 will attract people looking for something altogether more extreme. Huge flared wheel arches mean (in concept form at least) it is 40mm wider than the standard car and the new front bumper has massive ducts to aid cooling. A revised bumper also features at the rear and the R400 ditches the Golf R’s quad exhausts in favour of a pair of larger pipes mounted centrally. A set of 19-inch alloy wheels and a dual-element roof-mounted spoiler complete the look – the result is an aggressive appearance that is unique to the Golf range and a VW-Group answer to the outlandish styling of Honda’s Civic Type R.

The standard Golf’s rock-solid build quality is evident on the inside, but jazzed up significantly by the inclusion of a pair of thin-backed lightweight sports seats and two individual rear seats, all of which are finished in leather with Lemon Yellow highlights.

While the R400 was originally touted as a concept car with no plans for production, Volkswagen is set to make an about turn, with the car rumoured to go on sale at the end of 2016 as a direct rival to the new Ford Focus RS. It’ll sit right at the top of the Golf range with a rumoured price of around £40,000 – that’s £10,000 more than the standard R.