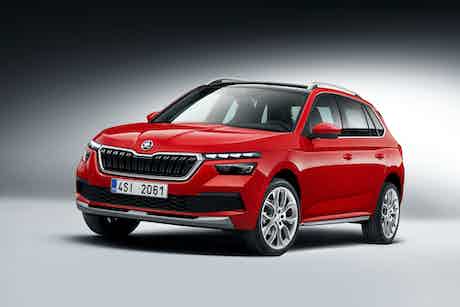 Further details have been revealed about the new Skoda Kamiq SUV ahead of its full public introduction at the 2019 Geneva motor show. Here’s everything you need to know.

The new Skoda Kamiq will be the smallest SUV in its range and will come with a healthy choice of three and four-cylinder petrol and diesel engines, all with front-wheel drive. The Kamiq is trying to tempt you from other small SUVs such as the Volkswagen T-Cross, SEAT Arona and Citroen C3 Aircross.

The Skoda Kamiq is much more than just a Skoda Fabia on stilts. For starters, the Kamiq has fresh new look, with a wide radiator grille at the front with double slats, a front splitter-style section lower down and distinct bonnet lines that give it a look more purposeful than its dimensions might suggest. At the side its bonnet line is high, while the 16 to 18-inch wheels available help further that butch appearance.

At the rear the Kamiq has C-shape lights and a rear diffuser-style section at its base. But don’t go thinking these splitters and diffusers are there to suck the Kamiq to the road surface as they might a race car against a racetrack – they’re purely for show.

The name Kamiq is taken from the language of the Inuit people who live in Northern Canada and Greenland. It means ‘something that fits perfectly’ relevant, according to Skoda, because the Kamiq is an SUV with compact dimensions that make it a perfect fit for the city. Oh, and like the rest of the Skoda range, it means the Kamiq has a name that starts with K and ends with Q – Kamiq, Karoq and Kodiaq.

The headline feature is Skoda’s new free-standing 9-inch touchscreen infotainment system, which stands out, well, because the rest of the Kamiq’s dashboard is fairly low-key. Expect the interior to be very solidly built, however, and they’ll be a decent smattering of soft touch materials, but it doesn’t exactly get your pulse racing.

You’ll have the chance to spec up the excitement and luxury inside. Features such as ambient lighting, a heated steering wheel and heated front and rear seats will be available to as option.

The Kamiq seats five people and gets a 400-litre boot – the same as a SEAT Arona. Its rear seats don’t slide and recline, but can be folded to open up the boot space further. In fact, you can also add a folding front passenger seats to help loads very long items.

There are three different infotainment systems available for the Kamiq. The top-of-the-range Amundsen system comes with a free-standing 9.2-inch touchscreen that is positioned up high, in clear view of the driver. So does the Kamiq’s optional 10.25-inch Virtual Cockpit with a choice of five different display layouts – Classic, Basic, Modern, Sport and Extended. These are the same dials you can add on other, larger Skodas – as well as lots of Audis – and here they should be just as easy to use, too.

Then there’s the Bolero infotainment system, which comes with an 8-inch display, while the entry-level Swing system features a 6.5-inch screen. The Swing model comes with a conservative four speakers, but Bolero and Amundsen come with eight speakers or the optional 405-watt Skoda Sound System ups the speaker count to ten.

The Kamiq also comes with a range of the latest connected features, such as internet news and weather feeds, as well as the ability to connect with an app on your phone to give you information such as fuel level, whether the windows are closed and even allow you to lock and unlock the car remotely.

There are four engine options for the Skoda Kamiq. They start with a 1.0-litre, three-cylinder petrol with 95hp and a five-speed manual gearbox as standard. That’s followed by the same basic 1.0 engine but with a punchier 115hp and the addition of a sixth gear for more relaxed motorway driving.

The range-topping petrol will be a four-cylinder 1.5-litre with 150hp. It can switch off two of its cylinders to save fuel at a cruise and is available with an optional seven-speed automatic gearbox as well as its standard six-speed manual.

Lastly there’s a 1.6-litre, four-cylinder diesel engine that produces 115hp and comes with the same standard six-speed manual or optional seven-speed auto gearboxes as the 1.5 petrol. No performance figures have been released, but expect that the 1.5 petrol will be the quickest in a sprint, while the 1.6 diesel should be the most fuel efficient of bunch.

The Kamiq has been raised up by 37mm over cars such as the firm’s new Scala, which is based on the same underpinnings.

However, there’s an optional sports suspension set-up which lowers the car back down again by 10mm and offers the chance to firm up or soften the suspension via different driving modes.

Driving Mode Select offers a choice of four modes: Normal, Sport, Eco and Individual. As an optional extra, underbody protection is available, although don’t think you will cross the Sahara in the Kamiq as all-wheel drive isn’t even available.

Skoda’s Front Assist and Lane Assist technologies are standard. Front Assist, which includes City Emergency Brake and Predictive Pedestrian Protection, constantly monitors the area in front of the car while driving in the city, helping to prevent accidents. Using a camera, Lane Assist recognises lane markings and helps the driver to keep the car in lane.

There’s also Rear Traffic Alert which warns the driver about objects moving behind the vehicle when reversing, while the optional rear-view camera and Park Assist can automatically drive the Kamiq into and out of parallel and bay parking spaces. The integrated Manoeuvre Assist function automatically brakes the city SUV if the sensors detect an obstacle in front of or behind the car during parking.

Lastly, Auto Light Assist is also available as an option. This uses a camera to detect oncoming traffic as well as vehicles travelling ahead of the Kamiq, and automatically dips the headlights.