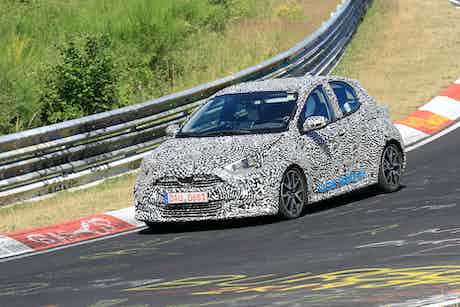 The latest version of the Toyota Yaris has been spotted testing at the Nurburgring in Germany. It’s set to get hybrid engines and a more spacious interior.

What these pictures tell you is that the new Yaris will also be a striking looker. It’s set to get the same front end styling as the new Corolla, which has a huge grille that looks like a triangle with its top lopped off. Slim headlights give the car a futuristic look and the protruding bumper should protect them from low-speed bumps.

The pronounced wheel arches on the car in this pic indicate it could be a sporty model, but you can expect all Yaris models to get the same creases running across their passenger doors as the car here. Around the rear of the car you can bet the Yaris will get slim LED tail lights, a bootlid-mounted spoiler and what looks like a lip under the rear windscreen.

What we know for sure is that Yaris will be offered as a hybrid model using an engine based on the one in the current model. It’s a 1.5-litre petrol boosted by an electric motor, which means the new Yaris will be available to run for a few miles on petrol power alone and is exempt from paying the London Congestion Charge. Expect Toyota to offer more than one hybrid version of the car.

There’s also good news if you’d rather stick with a conventional petrol engine. Toyota will likely fit the Yaris with a 1.0-litre turbocharged petrol that’s cheaper to run and nipper than the non-turbo 1.0-litre fitted to the current car.

What else will improve? Well, it’s a given that interior quality will take a step up and the new car will also get an all-new infotainment system with a bigger screen. Interior will also increase with the new model getting marginally more rear legroom and boot space than the current Yaris.

The new Yaris is set to go on sale next year; stay tuned for more news when carwow gets it.