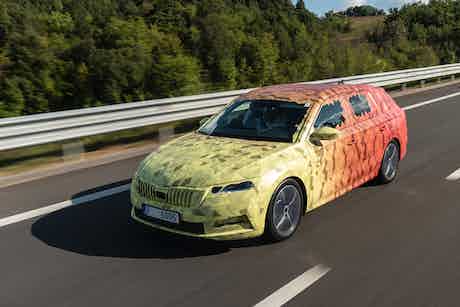 carwow has driven the new Skoda Octavia ahead of the car’s full reveal next month. Keep reading for a full rundown of specs and driving impressions.

Skoda has sold more than 6.5 million Octavia’s so when a new one comes along, it’s a big deal. This new car promises smarter looks, a posher interior with vastly improved infotainment, new mild and full hybrid engines and a more comfortable drive.

Yet, despite these wholesale changes, and the fact that new car is longer and wider than the old car, it’s still instantly recognisable as an Octavia. If that is, you can look past the vinyl wrap of these prototypes.

Upfront you get Skoda’s familiar grille design although in this iteration it is larger and more upright than in the old car. It’s also now flanked by optional matrix LED headlights, which have individual LEDs that are separately controlled by a camera mounted in the windscreen. It can detect other cars and switch of the corresponding LEDs individually so you don’t blind other drivers while keeping the road around fully illuminated.

Around the sides, the Octavia gets a sharp crease down its flanks while at the back you can see signs of the car’s crystal-style LED lights, which you’ll see properly when the car’s fully revealed next month.

While the changes made to the outside of the Octavia are a relatively subtle evolution of what’s come before, inside the updates are a lot more radical, though you’ll have to wait for the November reveal to see them.

For a kickoff, you can now have the Octavia with a pair of 10-inch screens and you can specify a head-up display that projects important information onto the windscreen, right into your line of sight.

Most of the car’s controls are now handled by the ten-inch central touchscreen – including the car’s ventilation system – and it now offers streaming services for TV and radio. Smartlink+ also means you can connect your smartphone to the car’s infotainment using Apple CarPlay or Android Auto over Bluetooth rather than using a cable.

That said, you can specify up to five USBC connections if you need them. Other options include an uprated Canton stereo and a 230V socket.

The upside of the Octavia’s arsenal of screens and touch-sensitive controls – even the stereo volume is adjusted using a touch-sensitive strip – is that the new Octavia’s interior has a much cleaner design than the old model’s. And, where you used to find rows of buttons, you’ll now see vast swathes of pretty trims.

The Skoda Octavia is one of the most practical family cars you can get and the new model doesn’t change that.

Up front, you get as much space as you did in the old car – so quite a lot – but you’ll notice the new armchair like ergonomic seats that can be heated and cooled. Backseat passengers, meanwhile, get 78mm more legroom and you also get more boot space – 640 litres in the estate and 600 litres in the hatchback, up from 610 and 590 litres, respectively, in the old car.

You’ll be able to have your Octavia with a choice of 110hp 1.0-litre three-cylinder and 150hp 1.5-litre four-cylinder petrol engines. Both can be had with mild hybrid-tech, in combination with a seven-speed automatic gearbox, that allows the car to coast for longer and engage its stop-start earlier to save fuel. The final petrol engine is the top-of-the-range 190hp four-cylinder which comes as standard with four-wheel drive and a seven-speed automatic gearbox.

To get more power you’ll need to choose from one of two plug-in hybrids that use a combination of a 1.4-litre petrol engine and a large electric motor to produce either 204 or 245hp. Both get a six-speed automatic gearbox as standard and will be extremely cheap to run if you have a short commute and a space to charge the car.

If you want cheap running costs but don’t have somewhere to charge a plug-in hybrid, you’ll want a diesel model. You’ve got three to choose from – all have 2.0-litre four-cylinder engines with power ranging from 115 to 200hp.

And your choices don’t end with the engine, you’ll also be able to choose from four suspension setups – the standard springs, sports suspension that’s 15mm lower or a Rough Ride chassis which provides 15mm additional clearance. Finally, you can have the DCC dampers which allow you to switch between a sporty drive or a soft and comfy ride – cars fitted with DCC sit 10mm lower than standard on all but PHEV models.

The new Skoda Octavia will be available with safety kit that has never been offered on a Skoda before such as Collision Avoidance Assist. In the event of an imminent collision with a pedestrian, cyclist or another car, it can momentarily take control, steering you around the collision. Meanwhile, Skoda’s exist warning system can warn you not to open your door into the path of a cyclist.

The cars Skoda laid on had 150hp either as 2.0-litre diesel – now quiter and smoother than before – or 1.5-litre petrol which remains as refined and spritely as it is in the current car.

Hit the road and you’ll notice the steering also different. It’s precise and free of slack allowing you to take full advantage of the new car’s dogged grip in bends. Through a series of tight corners, the Octavia’s body stays flat and there’s plenty of grip from the wide tyres on its 18-inch wheels. The seven-speed automatic gearbox, meanwhile, shifts quickly and smoothly, although the six-speed manual carwow drove later was slick and precise.

Along with being better to drive, the new Octavia is also a lot more comfortable. The electric steering muffles the feedback you might get from old-style hydraulic power steering, filtering out the writhing sensation you’d expect over bumps. The car’s also more refined in terms of noise. Skoda has crammed every gap under the new Octavia’s skin full of foam and the result is a car that feels almost cocoon-like compared to the old car.

It’s not all positive, though. Lower speed bumps and surface changes reveal a brittleness to the ride that isn’t present, though the optional DCC dampers might solve this.

To know for sure, we’ll have to wait for the car’s full reveal in November but on this evidence, there’s no reason to think that this Octavia won’t be at least as popular as the old model.