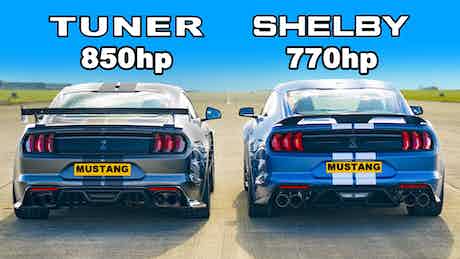 We’ve got a big ol’ slice of American pie for you today as two thumping V8 Mustangs go head to head.

As Mustangs go, these are pretty special. First up we have a Ford Mustang GT500. It has a 5.2-litre supercharged V8 putting out 760hp and 850Nm of torque. It’s got rear-wheel-drive and a seven-speed dual-clutch automatic gearbox to put the power to the ground. The Shelby isn’t the lightest car, weighing in at 1,900kg.

Going up against this, we have a Clive Sutton tuned Mustang CS850. This has a 5.0-litre V8 with a supercharger, as well as an uprated exhaust among other upgrades, so it produces 859hp and 900Nm of torque. This is fed to the rear wheels via a six-speed manual gearbox.

Check out the top sports cars on carwow

So will the massive power of the CS850 be enough, or will the manual gearbox be its downfall? You’ll have to watch the video to find out.