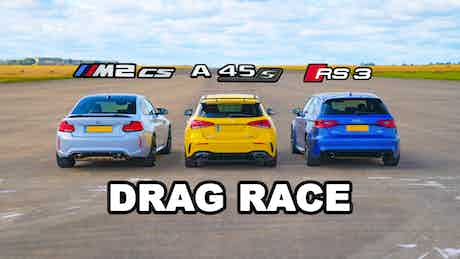 We know you’ve been looking forward to this drag race, the new BMW M2 CS facing off against the Mercedes-AMG A45 S and Audi RS3.

The new BMW M2 CS is already being touted as one of the greatest M cars ever, and it’s not hard to see why. But, it’s hard to shake the nagging feeling that it could do with a smidge more power…

BMW has addressed that issue in the CS by stuffing the twin-turbo, 3.0-litre, six-cylinder engine from the M4 Competition under the bonnet. So now it has 450hp and 550Nm of torque. Which is much more like it. That power, of course, goes to the rear wheels via an optional seven-speed, dual-clutch gearbox.

Then we have the Mercedes-AMG A45 S, the hottest hot hatch currently on the market. How hot? 421hp and 500Nm of torque from a turbocharged 2.0-litre, four-cylinder engine. How does Mercedes get that much power from an engine the size of a large bottle of milk!? Anyway, the engine is backed up by an eight-speed, dual-clutch gearbox that sends power to all four wheels.

See the latest Mercedes-AMG A45 deals

Lastly, we have the Audi RS3, which is a bit of a wildcard in this race. It’s a 2016 model which came from the factory producing 360hp and 465Nm of torque from its turbocharged, 2.5-litre, five-cylinder motor.

But the owner has had the engine tuned with a new intake, intercooler and full computer remap. So, it now produces 450hp and a humungous 750Nm of torque. Which may well be enough to overwhelm the quattro four-wheel-drive system when it’s unleashed. Fortunately, the seven-speed, dual-clutch gearbox has remapped to cope, as well.

This is one of those races that really could go either way. We’re on tenterhooks to find which car wins, so let’s get to the action.