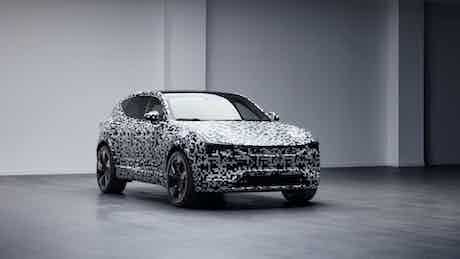 An all-new Polestar 3 is on the horizon and will be an all-electric SUV. Read on for everything you need to know so far.

The third car from Polestar is coming, and it’s an all-electric SUV. Creatively named the Polestar 3, it’ll enter production in 2022 as an alternative to the Mercedes EQC, Audi e-tron and BMW iX.

Check out the top 10 electric cars

This is your first glimpse of what the new Polestar 3 will look like, and it seems as though it will build on the Polestar 2’s design.

You can just about make out a similar angular headlight design to the Polestar 2. The front end appears to have an uncluttered look to it, while at the back you can see a sporty sloping roofline.

There isn’t much to report down the sides of the car, other than some Tesla-esque flush door handles. There are also some bold creases lower down to make the car look more muscular.

Company CEO Thomas Ingenlath stated that the Polestar 3 will be offered with both two and four-wheel drive – as is the case with the Polestar 2. He also confirmed that the dual-motor Polestar 3 would be positioned to compete against the most powerful EV SUVs on the market but stopped short of mentioning any specific performance stats.

You can expect some component sharing with the Polestar 2 which is available in 221hp, 228hp and 402hp configurations with up to 335 miles of range. It will also be getting an updated version of the Polestar 2’s Android Automotive infotainment setup.

Again, there are no official images of the Polestar 3’s interior so you’ll have to hold on a little longer for that.

It is known its digital display and infotainment system will be based on Android though, so expect native Google Maps and Assistant support. It’s likely to have a range of sustainable upholstery options as well.

Production of the Polestar 3 will start in 2022, so expect to see them first hitting UK roads later on next year.

Pricing could start around the £50,000 mark, and rising significantly for larger-capacity cars.

The Polestar 3 isn’t the only new electric car on the way from the Swedish brand. It also confirmed that the Precept concept will go into production in 2023. This four-door coupe will be an alternative to the likes of the Tesla Model S, Porsche Taycan and BMW i4.

The Precept (the name will change to fit in with the current Polestar range) will be marketed as a range-topping model although there is no word yet on what the battery and electric motor specs will be. As with the Polestar 3, you can expect it to share some parts with the Polestar 2.

Polestar CEO Thomas Ingenlath suggested that the maximum range would be capped at around 310 miles – citing this as a good compromise between useable range, vehicle weight and production costs.

Can’t wait for these new cars to go on sale? Compare the best electric cars on sale or check out the latest Polestar 2 deals available through carwow.