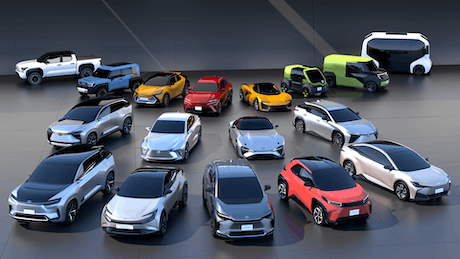 Toyota has revealed a raft of new electric concept cars as it plans 30 new EVs by 2030. Read on for full details.

Toyota has revealed a whopping 16 new electric concept cars in one fell swoop to preview its upcoming range of EVs.

By 2030, the manufacturer plans to offer 30 new electric cars across the Toyota and Lexus brands — with a target of 3.5 million EV sales by the same year.

It’ll look to hit that with a range of new electric cars along with battery versions of existing models.

The Toyota bZ Small Crossover shows how city cars could be evolving as demand for high-set cars continues to grow.

This could serve as a replacement for the existing Toyota Aygo.

Perhaps serving as a sportier-looking version of the new Toyota bZ4X, the bZ Compact SUV looks to be a coupe-styled electric car, similar to the Volkswagen ID5 and upcoming Nissan Ariya.

This seems one of the more likely models to make it to production if the trend of sleek-looking SUVs continues.

Serving as an electric car in the vein of the Toyota Camry, the new bZ SDN is another that could make production sooner than later.

Expect to be waiting for one as your Uber in 5-10 years time.

The Toyota bZ Large SUV looks to be similar in size to the current Toyota Highlander from this image, and the eagle-eyed out there will spot a third row of seats.

Now, this is where things get properly exciting. The Lexus Electrified Sport suggests an all-electric sports car is coming from the luxury firm, perhaps even as a spiritual successor to the LFA.

The concept will supposedly accelerate from 0-60mph in close to 2 seconds and has a range of around 435 miles.

Of all the concepts here, the Lexus RZ is the one closest to production.

Lexus has confirmed this is coming pretty soon as its first ground-up SUV, and what you see here is a near road-ready version of the car.

The Lexus Electrified Sedan looks similar in dimensions to its existing IS saloon, albeit with a more muscular design.

It could be looking to compete with the Tesla Model 3 and BMW i4.

It’d take on a bit more luxury inside if both made it to production, though neither interior has been shown off here.

For those big-city delivery companies, the Toyota Mid Box could be one for the shopping list.

Expect to see this kitted out in all-white on the road rather than these funky colours, though,.

The Toyota Micro Box looks like it was designed firmly with Tokyo in mind.

It’s as it says on the tin really, seemingly serving as a last-mile delivery vehicle for smaller parcels and takeaway food. A bit like the Citroen Ami Cargo.

Is this the return of the Toyota MR2? The Toyota Sports EV is a small roadster that shows Toyota is serious about its commitment to fun cars even as we approach an all-electric world.

The Toyota Crossover EV could sit below the existing bZ4X in its line-up as a smaller SUV, with somewhat tamer styling.

If you want your off-road kicks, the Toyota Compact Cruiser EV looks to have you covered.

This cool-looking SUV seems inspired by the FJ Cruiser that was never officially sold in the UK. Let’s hope that wrong is righted this time around…

It’s unlikely Toyota would go for a bespoke electric pick-up rather than using its existing Tundra as a base, so you could well be looking at the next-generation of that pickup here.

The Toyota Small SUEV looks like a much more refined version of the Aygo X Concept already showcased, and could well enter production looking more or less identical to this concept.

Rounding out this set of concepts is the Toyota e-Palette. This unconventional-looking van looks to be a unique alternative to the likes of the Ford Transit.

Looking to go electric with your next car? Compare the latest EVs on sale