Mercedes Mercedes-AMG is going electric: all you need to know

Mercedes-AMG is going electric: all you need to know 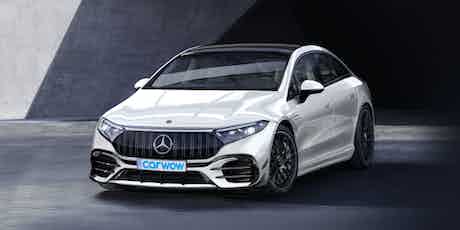 Yes, that’s right, Mercedes-AMG is going electric. It’s not quite as straightforward as that sounds, though. Read on to find out why…

Yep, you read that right. Mercedes-AMG — the kings of snarling great V8s that make for ridiculous burnout machines — is going electric.

Before you grab your torches and pitchforks though, it’s not suddenly doing away with performance brutes and making ultra-efficient commuter fridges though.

Rather it’s using electric power to make its machines even better in a time where petrol looks to be going extinct and performance cars as we know are on the way out of the door. Read on to find out just how they’re doing that…

Remind me again, what is Mercedes-AMG?

AMG is the in-house tuning division of Mercedes-Benz. For the most part, they take the regular cars from Mercedes’ production lines and shove whopping engines in them to give them loads of performance as well as messing about with the chassis to make sure the handling matches too.

Take the Mercedes-AMG A45 S, for example. It’s an A-Class with a 2.0-litre turbocharged four-cylinder engine there, which seems usual — until you find out it has 421hp hiding away in there.

That’s more than a Ferrari 360 Modena. In a hatchback.

The real Mercedes-AMG hallmark at the moment though is its 4.0-litre, twin-turbocharged V8 engine. This sits in everything from its take on the C-Class, the 476hp C63, right through to its own-built Mercedes-AMG GT Black Series with a monstrous 730hp.

So is it doing away with those engines for batteries?

Fortunately, Mercedes-AMG isn’t suddenly dropping its brutal engines for battery power. Rather it’s combining the two for some cars.

It does mean the big V8s will be reined in a little — boo, we know — with some of its cars getting a petrol-electric hybrid setup.

Not a mild-hybrid either, like it already does for six-cylinder cars like the E53 and CLS 53, rather linking petrol engines, which will be smaller in most cases, to electric motors for proper plug-in hybrids.

Hang on, before you reach for the lighter, it’s not necessarily a bad thing. Take a look at the new upcoming Mercedes-AMG flagship for example, the AMG One hypercar.

That’s using the same 1.6-litre V6 petrol-electric hybrid setup you’d find underneath any of Lewis Hamilton’s championship-winning F1 cars since 2017. Not a heavily detuned, half-baked version either — rather ripped straight out with just enough changes to make it road legal and not require a pit crew to start it.

Read more on the AMG One

That technology will then creep into the upcoming Mercedes-AMG GT 4-Door 73e too. This will retain the V8 found in the 63 but use a 6.1kWh battery to take power up from 638hp to 816hp.

The V8 is set to be culled from the Mercedes-AMG C63 saloon, though. This will instead see the 421hp engine of the A45 S boosted even further to 449hp, and linked up to batteries and a motor. That will take the total power output well north of 600hp.

Ah, you see, Mercedes-AMG still wants its cars to be fun as well as ultra-fast, so it’s doing more than strapping some batteries to powerful engines and calling it a day.

In the case of the C63, a new electric turbocharger is designed to do the trick. It has its own little motor which spools it up instantly when you hit the throttle, so you should get any lag between the instant torque from the car’s motors and the engine kicking in.

With the extra power though, it looks as though the hybrid Mercedes-AMGs will be going from rear-driven to all-wheel-drive though to help its cars make the most of its newfound grunt. That said, it should have a ‘drift mode’ built-in that will still allow for big skids and burnouts if you’re that way inclined.

So Mercedes-AMG is keeping some petrol power but also bringing in some hybrids for now. Got it. What about electric cars?

Ok so we’ve covered the hybrids, but there’s another thing to mention — and that is a new all-electric Mercedes-AMG car.

It won’t be its first, though. Remember the Mercedes SLS, that V8 brute with the gullwing doors? Well, it briefly had an electric version.

Simply called the SLS AMG Electric Drive, it used four motors to produce 750hp. It was more of a proof of concept limited production car rather than a full-blown effort at building an EV supercar, though.

It could only do 160 miles on a charge, and cost well north of £300,000. Only a handful of them were made too, and command an asking price of nearly £1 million when they very rarely appear on the used market.

Fortunately, the next one should be a lot cheaper and much more attainable. Set to be based on the upcoming Mercedes EQS saloon, it’s effectively going to be the electric equivalent of the S65 AMG.

It’ll have 761hp, perhaps not coincidentally identical to the Porsche Taycan Turbo S, and take on some aggressive styling tweaks to make it look the part too.

I think I’m sold on the Mercedes-AMG EQS. When can I get one?

Well, the Mercedes-AMG EQS is still some way off yet — don’t expect to see it revealed until at least 2022 — so you may want to hold onto that spare wad of cash behind the sofa for now.

Fair enough, can I get a plug-in hybrid Mercedes-AMG before then?

Almost certainly, yes. It looks as though the Mercedes-AMG GT 4-Door 73e will be revealed in full in the coming months, having been extensively teased, and could well be on sale before the close of 2021.

The C63 should then follow with a reveal later this year, perhaps going on sale early next year.